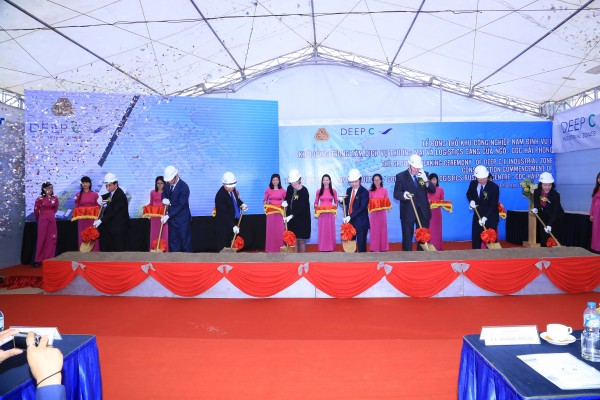 DEEP C II has a total area of 645 ha, and is located in a prime area with the Lach Huyen Deep Sea Port, Dinh Vu Port system, Hanoi – Haiphong Expressway, Cat Bi International Airport all within a stone’s throw. We are proud that, still in its early development stage, DEEP C II has already welcomed CDC International Corporation, one of the leading companies in Qatar in coastal industrial and urban area development, as the first FDI client to set foot in the industrial zone.

Having investigated several locations in the region, Mr. Khalil Boutros Al Sholy, Director of CDC International Corporation, has chosen DEEP C II to set up his first business in Vietnam. With a unique location surrounded by mega infrastructures projects undergoing, industries will soon burgeon in this area, so as the demand for commercial office and open storage for lease. CDC International is aiming to be the pioneer in this promising market by implementing its project of “Gateway Commercial and Logistics Business Centre”, with a total investment of approximately 2.2 million USD to develop office buildings and open storage for lease.

As highlighted by representative of Haiphong People’s Committee, the ceremony marks an important milestone and affirm the commitment of Belgian investor to Haiphong. Haiphong authority commits to create the most favourable conditions for the development of DEEP C Industrial Cluster and its investors. Mr. Marc Stordiau, Chairman of South Dinh Vu II/DEEP C II, affirms that the corporation will continue to deliver the same quality and reliability in infrastructure development, utilities and services provision as being enjoyed by existing clients of Dinh Vu Industrial Zone.

During the ceremony, our partner, Infra Induss Vietnam, now in charge of the water utilities services in the DEEP C Industrial Cluster, also proudly announced its ISO 9001 & 14001 certificates awarded to its central waste water treatment plant in Dinh Vu Industrial Zone. These certifications make the plant unique in the North of Vietnam and show the company’s commitment in continuing to use advanced environment technology that satisfies international corporations. With the expertise of Infra Induss, DEEP C II will also develop a special waste water treatment plant that can serve a dedicated textile village of approx. 100 ha, thus promoting itself as one of the very few industrial zones which can host companies in the textile industries.