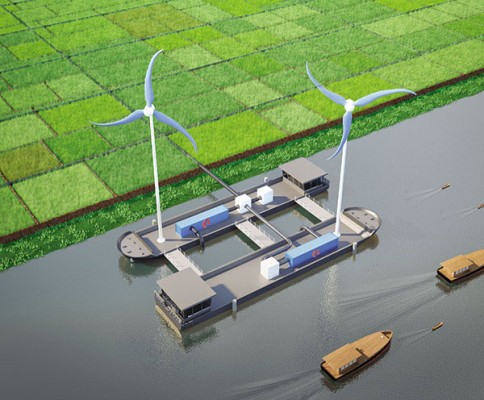 Last week saw the group’s subsidiaries, Rent A Port Green Energy and Rent A Port Utilities, sign a memorandum of understanding (MoU) with Vietnam’s Ministry of Agriculture and Rural Development (MARD) on co-operation in wind-driven desalination for agricultural production in the Mekong Delta region.

Accordingly, the Belgian firms and MARD will set up five demonstration wind-powered water desalination plants at a cost of $15 million, which are capable of providing fresh water for at least 200 hectares of rice fields in five locations across the Mekong Delta. Each demo plant consists of two water production units with a total combined peak capacity of 400 cubic metres per day. The salinity of the fresh water produced would be below 0.1 per cent, making it suitable for irrigation and even drinkable for the local people.

“We are expecting around 250 such plants to be built in the region, as a part of supporting Vietnam in improving rice production and the livelihoods of the region’s farmers. We are also willing to help Vietnam identify and seek the most suitable financing source for the development of such plants in the Mekong Delta,” Marc Stordiau, managing director of Rent A Port, told VIR at the MoU signing ceremony in Paris.

The Mekong Delta, the rice bowl of Vietnam, has been seriously affected by saltwater intrusion into its estuaries. Figures released by MARD show that between 2014 and this year, the rising salt levels affected more than 250,000 hectares of rice fields in the region, causing a loss of 1.5 million tonnes of rice, or 7 per cent of the country’s total output per year.

“This green energy driven desalination initiative by Rent A Port is in line with our ministry’s public-private partnership (PPP) approach to developing sustainable agriculture – the economic backbone of Vietnam,” said Tran Kim Long, director of MARD’s International Cooperation Department. He added that the model project could be replicated in other regions along Vietnam’s 3,200 kilometres of coastline.

Currently, Rent A Port’s green energy investment portfolio in Vietnam includes waste-to-power projects in the north-eastern province of Quang Ninh’s Uong Bi town and the neighbouring port city of Haiphong’s Dinh Vu peninsula, which each have a planned capacity of 500 tonnes of domestic and industrial waste per day.

The group is also working as the consulting and project manager of a project to clean up the Halong Bay World Heritage Site in Quang Ninh. The project, aiming to collect and treat the existing oil pollution and waste in the bay over the course of ten years, will cost an estimated $130 million.

“We are committed to a long-term business strategy in Vietnam, where Rent A Port will apply its core philosophy of sustainable development and environmental protection. The project to clean up Halong Bay is part of our efforts to contribute to the community in which we operate,” said Stordiau.

In September of this year, Prime Minister Nguyen Xuan Phuc greenlighted the $300 million seaport and industrial zone (IZ) complex invested by a consortium of three foreign investors in Quang Yen town of Quang Ninh. The consortium includes CDC International Corporation (CDC) from the Cayman Islands, Singaporean Middle Utilities Company, and Infra Asia Investment Company from Hong Kong, which is 94 per cent-owned by Rent-A-Port.

The group is also expanding its Dinh Vu IZ in Haiphong with total investment capital of $250 million in the DEEP C II IZ. In close proximity to the upcoming Lach Huyen International Port (the largest of its kind in northern Vietnam), Cat Bi International Airport, and the Hanoi-Haiphong Expressway, tenants in this IZ can capitalise on its unique advantages in logistics.

Stordiau also said that the group is now heading south, with a planned port and IZ complex of similar scale to the northern one.