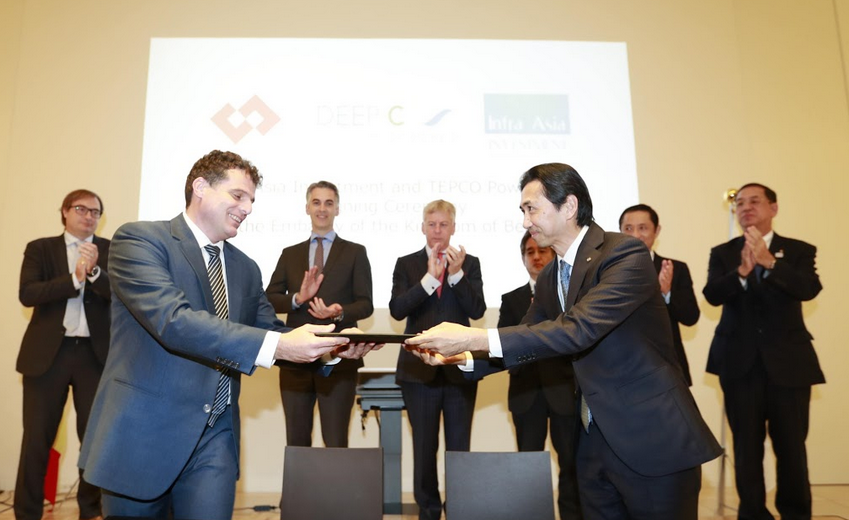 During a signing ceremony held on the 29th of November 2018 at the Belgian embassy in Tokyo, Tepco Power Grid (TEPCO) officially became a shareholder in DEEP C Green Energy (DCGE), a company established under the DEEP C Industrial Zones umbrella.

Since 1997, DEEP C has been successfully developing 3400 hectares of state-of-the-art industrial parks and ready-built-factories in Haiphong in Quang Ninh Province. Two years ago, pushed by the mission of providing its tenants with highly reliable and stable power in a redundant way, DEEP C saw the need to establish a company focusing solely on power, being DCGE. In addition to distribution power to tenants within the various industrial parks, DCGE started exploring new ventures in producing its own electricity from wind, solar and waste-to-energy.

TEPCO, the largest energy producer and distributor in Japan, recently expressed the ambition to expand its power grid business for the first time outside of Japan. The partnership with DEEP C in Vietnam marks the first milestone under the expansions abroad. The company, which was founded in 1951 in Tokyo, will put its experience to good use in enhancing the power infrastructure standards, improving operation efficiencies and installation of the renewable energy farms. Ultimately the partnership between DEEP C and TEPCO will improve service, operational efficiency and reliability even further.

Tenants in the DEEP C Industrial Zone benefit from various advantages such as the strategic location (being adjacent to the deep water port of Lach Huyen and directly connected to the new highway network), the best tax package commonly available in Vietnam and reliable utility provisions such as power, water, waste water and telecom. Making it an ideal investment location for companies form various sectors such as automotive, petrochemicals, supporting industries and logistics. To date the DEEP C cluster is home to more than 90 international projects with the likes of Bridgestone (Japan), Chevron (USA), Knauf (Germany), Pyeong Hwa Automotive (Korea)…